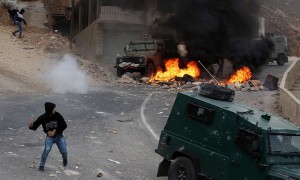 This is a Palestinian youth at Nablus in the West Bank, an epicenter of the current Israeli violence under the guise of a manhunt for the gunman who fatally shot two settlers.

A central feature of the Israeli narrative justifying apartheid & colonialism is vilifying Palestinian young people as terrorists & that has prevailed for decades. On the contrary, they are the front lines of one of the most important & historic freedom struggles in the world today. Their victory against the arrayed forces of tyranny would be monumental. And so their defeat.

Small consolation though to young people whose lives are wrenched from them by colonial repression & violence. When they should be courting, studying, exploring the world, goofing off with their friends, they are instead called to fight for their existence & to stand unarmed against one of the mightiest military forces in the world. They are assaulted by thugs; incarcerated & tortured in the Israeli gulag for their defiance; face jail sentences for using one of the only weapons they have–stones; forced to navigate through life military checkpoint to checkpoint. Many have sustained serious injuries, others have died.

We should take a moment to honor them–but of course that would be hollow if we did not actively engage to support them through rallies & building BDS. Their struggle against Israel, backed by the US, is so daunting but with their intransigent spirit & international solidarity it can be won.