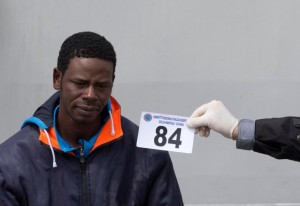 We aren’t told anything about this African immigrant, now identified as #84. It’s not certain we can even imagine what he’s just been through–from feeling compelled to leave family & town, the arduous trek to the Mediterranean coast, wrangling to find passage across the sea, & then surviving drowning. His very poignant face gives some insight into his trauma, fear, & griefs. Though not to his dreams & possibilities.

It isn’t clear what came out of the European Union summit on Thursday (vagueness serves criminality) except proposals for “surgical military strikes” to capture & destroy boats before they’re used by traffickers. Wow isn’t it a relief to know they won’t be bombing dinghies on the open sea when they’re jam-packed with men, women, & children!?

It’s also reported that Frontex, the EU naval goon squad, will send ships further into the Mediterranean to address the crisis. They now patrol within 30 miles of the European coast. Will they be sending ships 50 miles out or 100 miles out or just to Lampedusa? Because it’s over 200 miles to Libya from Sicily & that’s a lot of sea to drown in. Will they be leasing a lot more boats or wing it with a few patrol boats?

The EU mocks our intelligence when they promise to seek long-term solutions to the poverty & war in the Middle East & Africa compelling such massive immigration. What are they going to do? Pull out the multinational mining corporations? Stop sending private mercenaries to protect their investments? Close down their agribusiness plantations? Stop funding Israel, Egypt, paramilitary terrorists? Stop stealing national resources? Yank the IMF & World Bank out of the continent by their short hairs? Yeah, right!

Medecins Sans Frontieres (Doctors Without Borders) criticized the EU for declaring war on traffickers like they did Somali “pirates” instead of allocating resources to search & rescue. They pointed out the obvious that it will not stop immigration but only change the routes to possibly more dangerous ones.

It’s not that the EU officials are too stupid to recognize all that but that they are conscienceless, amoral people administering a predatory system. Nothing speaks more powerfully to the need to sink the EU than their callous & criminal indifference to the lives of hundreds of thousands of people displaced by plunder.

This man, who has a name, is disembarked from an Italian coast guard ship in Sicily. He will be processed as #84 & likely deported back to where he came from.