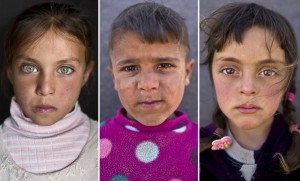 Muhammed Muheisen, the Palestinian photojournalist, is renowned for his portraits of Afghan refugee children in Pakistan. He has now done a series of portraits of Syrian refugee children at makeshift refugee camps in Jordan. Palestinians fleeing bombing in Syria are barred from entering Jordan & the country is now only partially opened to Syrians. (That’s part of an answer to the knuckleheads who keep blithering about Arab countries accepting refugees & asking why should Europe have to.)

There were several who took advantage of my posts about refugees to argue against immigration rights & cried “freedom of speech” when I cut them short. Experience tells me one of the arts of politics is knowing when to save your breath. I really don’t want to be one of those unfortunate souls who has to smarten up xenophobes & I don’t imagine most of my Facebook friends do either. They’re just too insular psychologically & emotionally. If you think like Drumpf, is pedagogy any use? Isn’t political power a much more effective educational device?

That’s to explain that my wall is not a democracy or a debating society on the issue of immigrant/refugee rights. In that regard, let’s not call it that, but it’s a dictatorship. Let the xenophobes remain silent (for once) & learn something rather than ruin our days with their rancidities.

These three traumatized-looking children are among the Syrians photographed by Muheisen. Posting them is partly my way of calming down the adrenalin from those who think they can use my wall to promote racism & hysteria about refugees. Mostly it’s to express solidarity with their right to find asylum wherever they want & to demand an end to the monstrous wars making their lives a living hell.