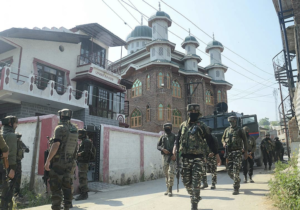 While Indian nationalists are breaking their Chinese-made TVs, hanging effigies of Chinese president Xi, & throwing pissing parties over the confrontation in Galwan Valley, Indian occupying forces in Kashmir continue their endless hunt to kill operations vandalizing & destroying homes, & killing young men under the guise of fighting terrorism. Eight young men have been killed since yesterday in two separate military operations in Pampore & Shopian.
In the Pampore operation, two of the militants entered a nearby mosque to take refuge. The army set up a cordon around the mosque throughout the night & used tear gas shells to force them out claiming they maintained the sanctity of the mosque. They don’t bother to report how the young men were killed if the soldiers respected the sanctity of the mosque.
The Indian Army uses the excuse of hunting armed militants to justify these almost daily military operations with high explosive weapons in residential areas. There are no reports of wide-scale terrorist activity in Kashmir. The operations are primarily intended to terrorize civilians.
Stand with Kashmiris & demand the immediate, unconditional withdrawal of all Indian forces from Kashmir.
(Photo of confrontation in Pampore by Basit Zargar)