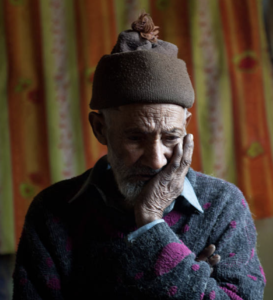 Atta Mohammad Khan died in January 2016 at the age of 75. He was the gravedigger in his village Bimyar, Chahal, near the Line of Control about 80 km from Srinagar. He was honored by Kashmiris when he died including by the Association of Parents of Disappeared Persons (APDP) which investigates the whereabouts of those forcibly disappeared & has documented 7,000 unmarked graves in several parts of Kashmir.
The APDP said, “Atta Mohammad was one brave Kashmiri who despite an atmosphere of militarisation & repression continued to speak truth. In the last 25 years of violent repression, Atta Mohammad in his village received 235 unidentified bullet ridden dead bodies, most of whom the armed forces claimed were militants killed in encounters. This included the dead body of a six-month old baby girl….Atta Mohammad was amongst very few people who came out in the open to testify as witness. He was perhaps the only grave digger who did not mind being identified by his name publicly despite being intimidated by the police. He was very keen that his testimony should have been used by the government for conducting a credible investigation into the phenomenon of unmarked graves in Jammu & Kashmir.”
In “Buried Evidence”, Atta Mohammad described his pain in preparing the bodies for burial: “I have been terrorized by this task that was forced upon me. My nights are tormented & I cannot sleep, the bodies & graves appear & reappear in my dreams. My heart is weak from this labour. I have tried to remember all this… the sound of the earth as I covered the graves… bodies & faces that were mutilated… mothers who would never find their sons. My memory is an obligation. My memory is my contribution. I am tired, I am so very tired.”
We should take a moment to honor Atta Mohammad for his contributions to Kashmiri & human freedom. May he Rest In Peace.
Atta Mohammad in his own words in ‘The gravedigger’s tale’: https://www.hindustantimes.com/…/story…
“The death of a very tired man’ about Atta Mohammad: https://www.thestatesman.com/india/the-death-of-a-very-tired-man-117794.html?
(Photo of Atta Mohammad by Yawar Nazir/Getty Images)