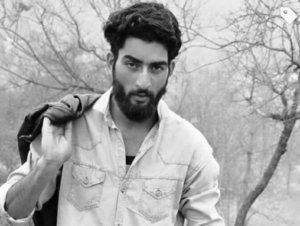 Zachriah Sulayman pays tribute to Gowhar Nazir Dar, a young man he knew who was killed by a tear gas shell while out buying yogurt on November 7th, 2015:
“Gowhar was an engineering student who lived on the outskirts of Kashmir. He had recently joined an engineering college to pursue his further education. On November 3, Kashmir’s resistance leadership called for a Million March on November 7. The day witnessed no such thing as the cities and towns of Kashmir were put under curfew. There were no protests except for some pitched battles between protestors and Government troopers. When the dusk was nearing, he went out to buy yogurt for dinner and came back in a shroud. They said he collapsed the moment a bullet shot from a policeman touched his head, or a “stray bullet”. The vehicle left leaving him blood-ridden on the road. The police said it was a tear gas shell. How do people die from shells in “self-defense”? The shooter had to be close enough to cause fatal damage.
He succumbed to his injuries in the hospital and the whole area was put under curfew again lest people might come out and protest but we were so struck with the incident that it was hard to believe it had happened. The tear gas canisters broke the window of his house. It was his funeral and he was not allowed to rest. His body was carried to the local martyr’s graveyard where they rested him. The next four days the whole Kashmir was shut. Inaccessible and silent. People changed their profile pictures. He was on everyone’s Facebook. His grandmother kept crying “why are so many people in the house” she didn’t know. After four days, she died of a heart attack unable to bear his loss.
The police stood on the roads and the boys too. They looked at the road. I vividly remember the silence that day. He had applied for a passport recently. There were so many things that he wanted to do–“get a job” even though they were scarce, but who can stop you from dreaming?
All cut short by a bullet in your head. The shopfronts were silent and we talked about the life he had and the little memories we cherished. The skinny boy was the heaviest coffin to carry. There are so many things about him that we wanted to remember, but his death is the most dominant truth. One day I was strolling in a market and a stranger asked: “whether I knew the person who attained martyrdom”. He was talking about him. I replied “yes”. “You look like him” he smiled and I reckoned. Some people never get old, they never age.
It was the funeral that never ended. It went on every year in November when the leaves fall and the winter comes. Something that never left us as if we were still carrying him on the shoulders and it keeps repeating. So many years have passed, so many boys have died and so many coffins are on our shoulders. We feel tired by the weight and it keeps piling up, never to stop.
I didn’t recognize his body when he died. I had never seen him dead, as someone said once. I had seen him three days back. We talked about the stubble he had been developing and lamented the tea. Martyrs never die, but tell me where they live? After four days, life was normal. It still is normal. Gowhar keeps dying, we keep counting and pasting their pictures on the walls that read “Shaheed” before their names. He too ended a poster on some wall, but he was more than a picture, a figure in the files that dances with the dust. He was a friend and a life that was cut short. There are so many things I wish to write but nothing will suffice. Until victory, always.”
(Photo is Gowhar Nazir Dar, RIP November 7th, 2015)