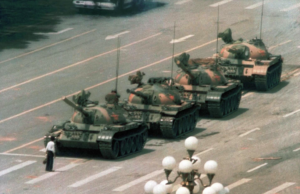 On the morning of June 5, 1989, a day after the Tiananmen Square massacre, a column of tanks began rolling out of the ­plaza. A man carrying shopping bags stepped in front of the tanks waving his arms & refusing to move. The tanks tried to go around him but he moved into their path & even climbed on to one. Eventually, the man was whisked away, whether by undercover agents or supporters of the protesters we do not know. He remains anonymous. But he has become a symbol of resistance to autocracy representing the millions who have given their lives in the struggle for democracy & human freedom.
(Photo by Jeff Widener, 1989)