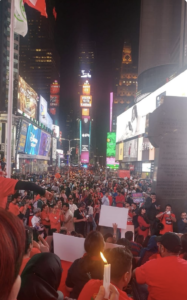 Just to remind Kashmiris who were under telecommunications lockdown last year: the protests around the world in solidarity with your struggle were not as massive as the civil rights protests today but many of them were massive, they were certainly sustained, & there were hundreds of them all over the world. They were mostly initiated by Kashmiris in diaspora but participants were every kind of human rights activist. A Kashmiri solidarity movement has come into its own when for 72 years Kashmiris stood alone. Those days are gone. You have thousands of supporters all over the world.
This is Times Square in NYC in September 2019 when Modi was being feted at the UN. The slogan was ‘Go red for Kashmir’. Times Square rang with the chant of ‘azadi’.