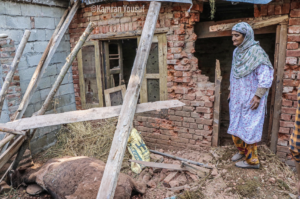 This is a scene from the search & seizure operation last night in Kangan village in the Pulwama district of Kashmir: a woman standing in front of her half-destroyed home & dead cow. Apparently, cows in Kashmir are not as sacred as those in India. The joint operation was launched by the J&K police, & two kinds of Indian Army special forces (CRPF & RR).
Indian media headlines the operation for killing three ‘terrorists’ (Kashmiri media calls them militants) but Indian media has a formula for reporting these brutal, & almost daily, operations. This is the second search & seizure operation in Pulwama in the last couple days. One Indian source does report that the army & police were conducting house to house searches in Kangan not long after midnight when they came under heavy fire from the militants–though it’s not clear how heavy three militants with a rifle apiece can subject three entire units of soldiers. Indian media is so focused on portraying the Kashmiri freedom struggle as terrorist that they may not realize how damning it is that the army & police move hundreds of men into a district & drag people out of bed in the middle of the night to search, ransack, loot, vandalize their homes & kill their livestock. That would be defined as terrorism by most people in the world & it’s an outrage that Kashmiris are subjected to such predations.
Stand with Kashmiris & demand the immediate, unconditional withdrawal of all Indian forces from Kashmir.
(Photo by Kamran Yousuf)