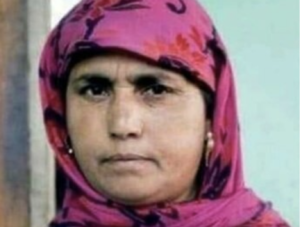 On June 20th, police arrested Naseema Akhtar in the Kulgam district of south Kashmir accusing her of involvement in ‘recruiting militants & arranging arms’ for them. She was arrested under the Unlawful Activities Prevention Act (UAPA). Her family reports that the police raided her home & arrested her after setting up a military operation in the district. They were also hoping to arrest her daughter Rafeeqa who they have been hunting down since 2018 for alleged involvement in ‘terrorist’ activities. If the daughter was there, she eluded capture by the police. Naseema is also the mother of Tawseef Ahmed Sheikh, a militant killed by Indian forces in May 2018, & the sister of Abbas Sheikh who has been a militant since 2015.
Kashmir Civitas tweeted that ‘This is not an isolated case. People are being harassed, intimidated, assaulted & arrested everyday by Indian state forces in Kashmir. Houses are raided & ransacked all the time. It’s just that nothing gets reported because journalists have been badly silenced in Kashmir.” Many may be silenced by being harassed, intimidated, assaulted, & arrested but many continue to speak out & document the criminality of the occupation.
There needs to be an international defense case demanding the release of Naseema Akhtar & all Kashmiri political prisoners. We can participate by posting our protests against her arrest & demanding her immediate release.
(Photo of Naseema Akhtar from The Kashmir Walla)