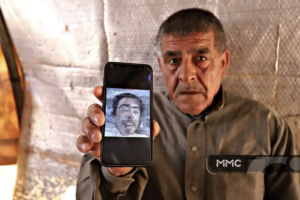 This bereft Syrian man is Ismail Al-Hani. He lives in a refugee tent because of Syrian & Russian scorched earth bombing. Three of his children were killed in the bombing & he is holding up a Caesar photo of his fourth son who was tortured to death in Assad’s gulag. Imagine how it feels for him to be labeled a terrorist by thousands of erstwhile antiwar activists & socialists who joined with fascists, Islamophobes, & anti-Semites to vilify the Syrian Arab Spring in its uprising against the Assad police state.
Stand with Ismail Al-Hani & demand the immediate, unconditional withdrawal of all foreign military forces & mercenaries from Syria.
(Photo from several sources)