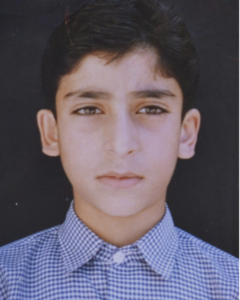 Today Kashmiris are commemorating the killing of 17-year-old Shaheed Tufail Mattoo, the first casualty in the 2010 Kashmir Intifada. He was not protesting the occupation but around 7 pm was on his way home from an educational center where he was tutoring for the medical exam to become a doctor. It was under the tenure of Omar Abdullah as chief minister–the same Omar Abdullah now playing a Nelson Mandela impersonation after being detained in a luxury suite for a few months; the same one who gave advice on how to stay in shape while held as a ‘political prisoner’ in health spa conditions. It was then that Omar Abdullah first allowed India the use of pellet guns against unarmed civilians.
As young Tufail Mattoo walked home with schoolmates that day, J&K police officers from a nearby protest took after them chasing. The other young boys managed to escape. But when Tufail slipped & fell, the officers, hurling invectives at him, shot a tear gas shell from close range at the back of his head causing such damage that his brains splattered.
As their only child, Tufail had a close relationship with his mom & dad. When his dad was notified of his death, he had to go to the site in a grief-stricken state to bring his young boy to the hospital. Within hours of his killing, the whole of Srinagar was on the streets protesting the killing. His funeral prayers were attended by thousands. In attempting to suppress the protests, including with pellet guns, the Omar Abdullah government killed more than 120 civilians, mostly teenagers like Tufail.
Tufail’s grieving family has repeatedly approached the courts over the past ten years to get the officers identified & prosecuted but have been stonewalled the entire time. His killers are still at large. Police first refused to file the case. Later, the investigative agency claimed insufficient evidence to identify the police officers who executed Tufail & keep trying to close the case without resolution. They also claim he was hit in the head with a stone, not a tear gas shell, thereby attempting to blame protesters rather than police for his death.
Muhammad Ashraf Mattoo & Tufail’s mother Rubina Mattoo still grieve the loss of their beloved son & do not want his death exploited. Paying tribute to him as the first victim of the Kashmiri Intifada honors him & all those, young & old, who have died in the struggle for freedom against colonial occupation.
Human rights activists around the world honor Shaheed Tufail Mattoo by demanding the immediate, unconditional withdrawal of all Indian forces from Kashmir. May he Rest In Peace.
(Photo of Tufail Mattoo from his family, June 11, 2020)