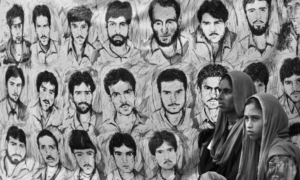 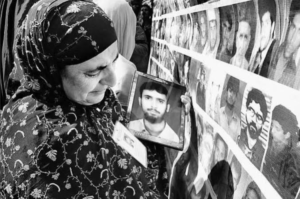 These are photos from the regular protests held in Srinagar by the Association for Parents of Disappeared Persons (APDP). Forcible disappearance is a particularly gruesome crime inflicted to also punish the families of those disappeared, incarcerated, tortured, often murdered & dumped in mass graves. There are thousands of mass graves in Kashmir which the Jammu Kashmir Coalition of Civil Society (JKCCS) has investigated & written reports about. Khurram Parvez of the JKCCS & Parveena Ahangar of the APDP play a leading international role in campaigning against forcible disappearance which is used by governments in at least 50 countries as a means of social control & repression.
There is no resolution of the grief as long as families do not know what happened to their beloved. There has been no accounting by the Indian government of the between 8,000 & 10,000 Kashmiris forcibly disappeared since 1989.
Stand with Kashmiris in demanding an accounting for every one forcibly disappeared & in demanding the immediate, unconditional withdrawal of all Indian forces from Kashmir.
(Photos tweeted by @haazek_, posted June 10, 2020)