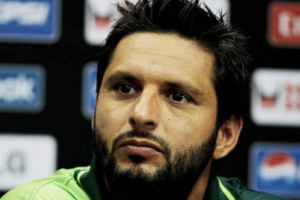 You don’t have to know a thing about cricket to respect Pakistani cricketeer Shahid Afridi for his outspoken support for the Kashmiri freedom struggle including on a recent trip to Australia. He also just visited Azad Kashmir to distribute corona protective equipment & again spoke out on Kashmir saying “The world is currently infected by such a big disease. But the bigger disease is in Modi’s mind.”
Indian cricketeers went ballistic on Indian media & Twitter like a chorus of braying jackasses in defense of their ‘honorable Modi’. They were accompanied by the braying of politicians like Ravinder Raina, the BJP president in J&K. Retired Indian cricketeer Gautam Gambhir came on Indian TV to chide Shahid, “It is unfortunate playing politics at a time of crisis” whilst suggesting Pakistan was engaged in terrorism in Kashmir. He of course never addressed the occupation of Kashmir with one-million Indian troops & ended, as did Raina, with some cheap shots about Shahid’s cricket skills. When it comes to nationalism these cricketeers are second to none. But then, why bite the hand that feeds them? If they supported justice in Kashmir, they would be thrown out of cricket & vilified as terrorists.
A salute to Shahid Afridi who certainly knew the abuse he would face for standing with Kashmir.
(Photo of Shahid Afridi from Outlook India)