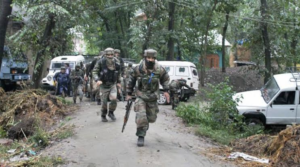 Kashmiri media reports that a joint force of J&K police, Indian Army, & CRPF special forces launched a massive cordon & search operation in many areas of South Kashmir’s Pulwama district. Officials claim some snitch gave them specific information about the presence of militants. Isn’t that the same exact region where health officials just reported 55 J&K policemen tested positive for corona? Fifty-five cases before they’ve even completed testing all the officers? Have they done any testing of the soldiers or special forces before sending them in to an area with thousands of civilians? Or don’t corona protocols matter much in a genocide?
Demand the immediate, unconditional withdrawal of all Indian forces from Kashmir.
(Photo of hunt to kill operation from files of The Kashmir Press, posted on May 18, 2020)