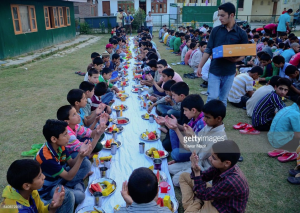 Dramatizing how tragic the story of the inconsolable infant whose mother was killed in a hunt to kill operation & father arrested for stone pelting, these are Kashmiri children in an orphanage preparing to break the Ramadan fast. There are 214,000 orphans in the valley, per a 2010 study, 37% of whom lost their parents to the turmoil of the military occupation.

The military occupation of Kashmir, as of Palestine, is a children’s rights issue.

(Photo from Getty Images via Muhammad Uzair on Twitter)