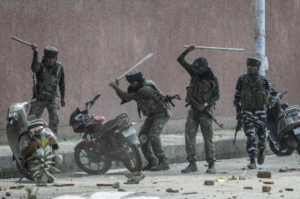 The NY Times published an article today on the gunning down of Riyaz Naikoo which called his death one of the most significant recent victories for Indian troops in India’s dispute with Pakistan over Kashmir. It suggested that the struggle for independence is ‘leaderless’ now that a leading figure in armed resistance has been killed & said Kashmiris have ‘often supported a brutal fight for independence’. How many idiocies can you pile into one article?
Riyaz Naikoo was home visiting his sick mother when the Indian Army received a tip that he was in town. They set up a cordon & bombarded the town with heavy artillery for several hours, destroying several homes, terrifying unarmed residents, & killing Riyaz. How can such brutality & cowardice be considered a significant victory especially when thousands of outraged, unarmed, & entirely fearless protesters later came out to bombard army vehicles with stones? How can the NY Times continue to subordinate the Kashmiri freedom struggle to a fictitious narrative about Kashmir being a disputed territory between India & Pakistan when one million troops occupy & perpetrate violence against Kashmiris & are not amassed on the Pakistan border?
Guerrilla warfare is a minority political perspective within the broader Kashmiri freedom struggle. There are tens of thousands of activists protesting, organizing, writing, campaigning against human rights crimes, against forcible disappearances, against incarceration & torture (including of young children), against mass rape as a weapon of occupation. What about those activists? Are they left leaderless & floundering now that India has engaged in another incident of brute force? Get real.
As for Kashmiris supporting a brutal fight for self-determination, how can the writers talk such rubbish after the 2019 lockdown, after all the arrests & torture of kids, after Kunan-Poshpora, after over eight thousand forcible disappearances, & thousands of mass graves with unidentified bodies? What is so brutal about Kashmiri popular resistance to all that? Stone pelters? A handful of armed militants?
The NY Times did not report on the Kashmiri struggle until compelled to by Kashmiri activists on social media as a way to get ahead of the narrative. Its primary concern is not Kashmiri self-determination but protecting US economic, military, & political relations with India. Its reporting will reflect that.
Speaking of a brutal fight, this photo from May 14, 2019 is Indian paramilitary soldiers vandalizing bikes outside a college in Srinagar where students were protesting the rape of a 3-year-old girl..
(Photo is by Pulitzer prize winner Dar Yasin, posted May 6, 2020)