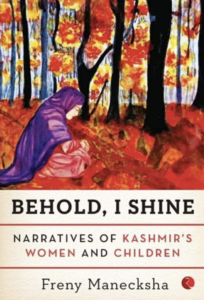 This is the cover of Indian journalist Freny Manecksha’s book on Kashmiri women, the role they play in the freedom struggle, & the way the Indian Army uses violence against women to destroy the freedom struggle. It is of course the art work of Rollie Mukherjee. The book is important because of the role Kashmiri women play internationally in campaigning against forcible disappearance, the use of rape as a weapon of war & occupation, the arrests of young children, & in the general struggle against colonialism & occupation.
(The book is available at Amazon.)