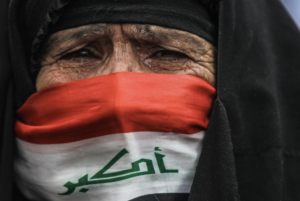 An Iraqi woman veiled by a national flag is protesting in Tahrir Square, Baghdad on January 10th. Millions of Iraqis marched around the country against government corruption & collusion with foreign powers & demanding “No to America, no to Iran!”

The Assadist & Stalinist cult that usurped the antiwar movement is ignoring these momentous protests that have gone on for nearly three months, where an estimated 600 Iraqis have been killed & over 25,000 injured, & are instead still writing eulogies for Iranian terrorist-in-chief Suleimani & calling only for ‘no war against Iran’. No war against of Iran, of course! But what about also supporting the people of Iraq, Syria, Yemen, Afghanistan, Lebanon, Somalia, Libya?