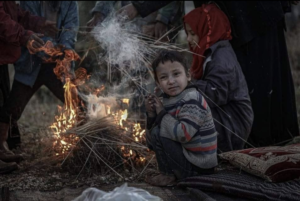 One would have to be knowledgeable about the complex military strategies of Syria, Russia, Iran, the 60 member US-NATO coalition, Israel, & Hezbollah in Syria & Iraq to really understand whether it was US-NATO bombers in league with Kurdish ground militias who routed ISIS (as the Pentagon claims) or General Qassem Suleimani’s paramilitary death squads (as Assadists & Stalinists claim). The problem with the claim, whoever makes it, is that the defeat of ISIS was not the preeminent political goal of any of these forces. They worked doggedly & seemingly at cross purposes to defeat the Syrian Arab Spring & to decisively subjugate the people of Iraq & they all did so using the most unspeakable savagery against Syrian & Iraqi civilians.

The several month sieges by US-coalition bombers & Kurdish ground forces of Mosul, Iraq & Raqqa, Syria involved genocide of thousands of civilians. According to reporters after the so-called liberation of Mosul from ISIS, the city reeked with the stench of rotting corpses buried in bombed out rubble. They were mostly civilians unable to flee as well as ISIS militia members. The US used white phosphorous against thousands of civilians & ISIS militias in Raqqa. It might have been a better military strategy to protect civilian lives by cutting off arms supplies to ISIS, arms which came from countries including Russia &, according to a US Pentagon report, the US. That way thousands of civilians would not be forced to flee or be slaughtered in their homes. But that of course would leave the Syrian Arab Spring still standing.

So what part did General Suleimani’s death squads play in all this slaughter ostensibly to defeat ISIS? We don’t know. But they must have used death squads in concert with US bombers. One Assadist said the assassination of Suleimani was “The saddest day of my life. A hero was killed. Soleimani’s murder will be the end of the world as we know it.” Iran has already replaced Suleimani as general of terrorist death squads with another experienced war criminal. It isn’t the ‘end of the world as we know it’. That happened when once progressive political forces sided with the Assad dictatorship against the Syrian Arab Spring. It happened when those supporting Assad & those opposing his dictatorship both decided that choosing an army, like it was a football match, & supporting military intervention in Syria was the only strategy in town. It was a decisive rupture between the forces supporting militarism & those opposed to war, occupation, genocide.

The only principled demands for a new international antiwar movement are the immediate cessation of Syrian & Russian bombing, & the immediate, unconditional withdrawal of all Russian, Iranian, US-NATO, Hezbollah, Israeli, & Saudi-coalition forces & mercenaries from Syria, Iraq, Afghanistan, Yemen & no US war on Iran.