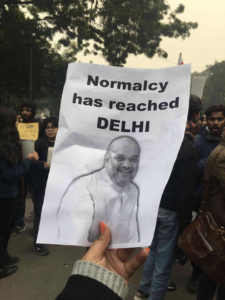 Kashmiris are extending solidarity with Indian protesters despite being ignored & vilified as terrorists & separatists by most Indian progressives & socialists for 72 years. They are doing so because they, better than anyone, understand the character of Indian fascism. Nothing happening in India comes as a surprise to them since they have sustained the same & worse for so long. Still, they are responding not with spite but with active solidarity.

It’s true, as some have said, that there is no equation between the struggle against fascism in India & the struggle for self-determination & independence in Kashmir. No political equation except the monumental struggle against the common enemy of Indian fascism. If the Modi regime succeeds in establishing fascist rule in India, it will significantly weaken & set back the Kashmiri struggle for a long time. There is no percentage in using spite as a political guide. Solidarity is the iron law of social transformation & Kashmiris have never required prodding to express it with all the oppressed.

Kashmiris have long been the vanguard in educating about the character of Indian fascism since they’ve experienced it up close & personal in its most violent forms. They should be respected by the Indian movement as part of the leadership in turning back the tsunami of Indian fascism precisely because of their knowledge, their experience, & their undaunted commitment to freedom despite the brutal occupation. In that way, finally the grip of corrupt political forces can be broken & a nationally coordinated anti-colonial movement for Kashmir can be built.

(Photo is placard at Indian protest via Scroll)