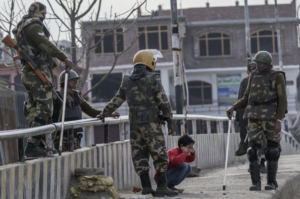 This photo from March 2017 shows one way the Indian Army tries to ‘win the hearts & minds’ of Kashmiris: by humiliating & traumatizing the children. Here, paramilitary soldiers–who are trained & equipped for counterinsurgency warfare like the kind of soldier who fights ISIS–are forcing a small school boy in Srinagar to perform sit-ups while holding his ear lobes. That is reportedly a common punishment for schoolchildren in India. At least where children have schools. So much artillery & personnel deployed to Kashmir means many Indian kids don’t have schools to go too.

It is also reported that in the 1990s it was common for the Indian Army to force Kashmiris of all ages to do calisthenics on the side of the road to humiliate them & break their will to resistance. So that is what hundreds of thousands of counterinsurgency troops trained in Israeli methods do in Kashmir. To ‘win hearts & minds’ by brutalizing? To fight terrorism where it doesn’t exist? Or to destroy the struggle for self-determination by terrifying little kids & disabling or killing those who protest?