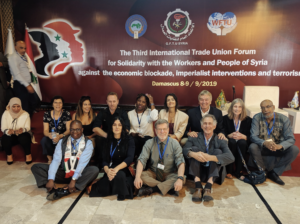 As Syrian & Russian war planes turn Idlib into a killing field & as thousands of Syrian refugees in Turkey are being forcibly deported back to Syria where they face arrest, torture, execution, the Assad regime called a trade union conference in Damascus to express solidarity with the counterrevolution. Since trade unions are outlawed in Syria, except for the state-sponsored, Assad controlled federation, it wasn’t really a trade union conference but a dog & pony show.

We know it’s not a trade union conference since legal unions do not exist in Syria but also because the US delegation included at least seven people who have no associations whatsoever with trade unions but are corrupt Assad propagandists. Paul Larudee (first row far right) is a piano tuner, Rick Sterling (behind Larudee) is a retired engineer, Judith Bello (2nd from far right second row) is a retired engineer & yoga teacher, Ajamu Baraka (second row far right) works for a think tank of some kind. Rania Khalek & Anya Parampil (3rd & 6th from left in second row) work for Russian state-owned media, & Max Blumenthal (4th from left in second row) is an all-around rightwing jackass who as a millionaire travels the world supporting dictators & denouncing popular movements against them as ‘US regime-change operations’. Who knows who the hell the others are!? Who cares? All of them are in Syria to promote the Assad dictatorship & Syrian & Russian bombing of civilians going on as they posed for pictures.

Whilst Idlib burns with at least 550,000 in flight for their lives from bombing with no place to go, Blumenthal, Khalek, & Parampil were posting photos of themselves dining in swank & trendy nightclubs. Blumenthal’s investigative journalism turned up the invaluable info that Damascus has forty new nightclubs & that more couples are cohabiting without marriage now that Assad’s secular regime is triumphal. Since they were there to party on Assad’s propaganda expense account, they didn’t bother to investigate the massive bombing in Idlib or the crisis faced by thousands of refugees forced to return to a war zone. What kind of people go to war zones & slaughter of such apocalyptic dimensions & post photos of themselves grinning ear to ear in nightclubs?

This delegation at the September 8-9 propaganda event in Damascus is from US Labor Against the War, a group whose social media followers are all Assadists & Stalinists. If they ever served a progressive role in US politics, that is long since ended. May they rot in hell.

(Photo from US Labor Against the War) 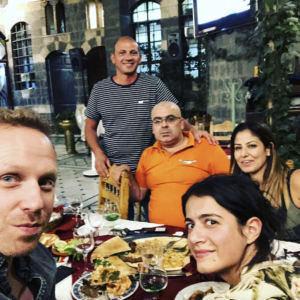 Photo of Blumenthal, Khalek, Parampil dining in style while Syrian refugees starve and thousands of civilians are being bombed: