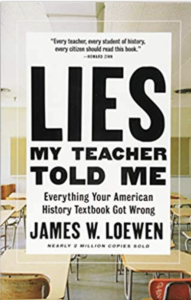 Another great book about Black & Native American history in the US is “Lies My Teacher Told Me,” by James W. Loewen, also now a retired professor. His work focuses more on the exclusion of Black & Native American history in the American school curriculum, including at the university level. He has a second book titled “Lies Across America: What Our Historic Markers & Monuments Get Wrong” about the hundreds of confederate monuments all over the US from coast to coast which honor the confederate & Indian genocide legacies & are maintained at great cost by white supremacist groups. As you recall, some of them came under attack after racist assaults on Blacks a few years ago. But most of them still stand praising the genocide of Native Americans & the legacy of Black slavery. Odious things that will have to be razed with jackhammers when the US has rid itself of white supremacy. Don’t mock that as a delusional pipe dream. It is possible if we organize for that political goal.

(Cover of “Lies My Teacher Told Me”)