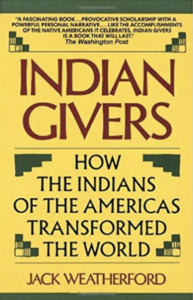 I’ve read a lot of books on Native American history & consider the writings of Jack Weatherford, an emeritus professor at Macalester College in St. Paul, Minnesota, to be among the best in presenting the considerable contributions Native Americans have made to world civilization & not just in agriculture & textiles. He demonstrates how their achievements were taken to Europe & advanced the industrial revolution. Their agricultural achievements, especially cultivating potatoes & corn, have traveled the world on every continent from Timbuktu to Ireland.

His work was highly regarded by Native American tribes in Minnesota & he was frequently asked to speak & participate in their conferences & gatherings. There is no hint of patronizing in his works. He is also known for his book “Genghis Khan & the Making of the Modern World” for which he was awarded the Order of the Polar Star, Mongolia’s highest national honor for foreigners.

This is the kind of history that Native American children want to read rather than constantly shove the genocide down their throats as a constant reminder of their on-going humiliation. It isn’t an attempt to deny or cover up that history–they would be the last to want that–but to put it in political perspective so they can feel pride in their culture, not just degradation & outrage at their persecution & at a genocide which has by no means ended.

(Photo is cover of a remarkable, readable book)