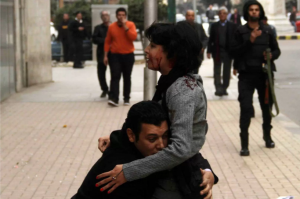 Yesterday was the 2nd anniversary of the death of 33-year-old Shaimaa al-Sabbagh, a socialist activist from Alexandria, Egypt who was peacefully marching with a group of less than 20 people to Tahrir Square in Cairo to lay a wreath in tribute to the thousands of activists killed in the 2011 uprising which had been decisively reversed by the military in July 2013.

As soon as the memorial procession set out behind a banner, masked riot police blasted the group with tear gas & pellet guns from across the street to disperse them. Sabbagh was shot in the back of the head, neck, & side of her face & died from shotgun pellet injuries to the heart & lungs & bleeding from the chest. Other participants also sustained pellet injuries but no one was killed.

The man frantically holding Sabbagh up is Sayyid Abu el-Ela, a personal & political friend of hers. He carried her across the street out of the line of fire & placed her on the sidewalk as she died.
Since the defeat of the revolution in July 2013, the killing of protesters has become a regular occurrence. The day after Sabbagh’s death was January 25th, the 4th anniversary of the uprising, & at least 20 more protesters were killed; several others were killed across Egypt on following days.

Since her death, Shaimaa al-Sabbagh has become a symbol of continuing opposition to Egypt’s military junta. It is far too early for libertarians & cynics to write their jubilant requiems for the Arab revolutions against dictatorship. The seething & continuing defiance may explain the extreme barbarism & attempts to destroy the revolutions in Yemen & Syria by carpet bombing & by extreme repression in Bahrain.

Long live the Arab revolutions. Our tribute to those who died in the momentous struggles for democracy.