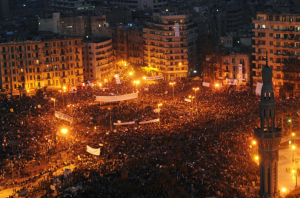 Today is the 6th anniversary of the Egyptian Revolution which overthrew Hosni Mubarak 18 days later on February 11th after 30 years of dictatorial rule.

The very next day after Mubarak’s ouster Global Research began its campaign against the Arab Spring denouncing the uprisings as funded by US agencies & staged by undercover US operatives. Their right-wing treacheries became full-blown in denunciations of the Syrian Revolution, which began March 2011, & continue till today. They’ve never been able to explain how the US got millions of Egyptians, Bahrainis, Yemenis, Syrians to play revolution, to get their heads beat in or submit to torture, incarceration, disappearance, execution.

It is Egyptian working people who will write the next chapter of their revolution. Did they ever say it was over? No one underestimates the weight of General Sisi’s counter-revolution–the toll it takes on the human spirit & that repression takes on political action. A force as powerful as the Egyptian Revolution may be set back, even for a while, as they recoup & assess the reasons for the defeat. But it will rise again more aware of the treacheries used to defeat them & more steeled in battle.

General Sisi’s regime clearly does not share libertarian cynicism about the future of the revolution or regime repression would not be so extreme & violent. Nor would he have marked the 6th anniversary of the revolution by closing the Sadat metro station leading to Tahrir Square.

The photo is Tahrir Square on January 25, 2011. Was there ever a more glorious sight for the oppressed around the world?