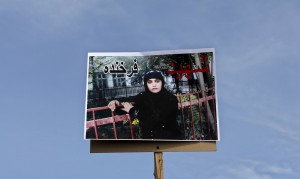 We should take a moment to grieve the loss of another woman to misogynist violence–Farkhunda, the 27-year-old Afghan woman beaten to death by a mob on March 19th. Media accounts are still unable to get the story straight about how she was murdered but it was a monstrous, gruesome crime. Accounts say she was lynched, dragged behind a car, run over by a car, had her body thrown off a roof, set on fire, & dumped in the river. Media reports “Narratives diverge.” Isn’t that always the case at a crime scene!? But cellphone video from the scene was aired on local television. In addition to identifying the perpetrators, isn’t it possible to determine what actually happened?

Those videos might also explain why police stood by & did nothing to stop the assault, which according to witnesses went on for nearly an hour. Afghan president Ashraf Ghani told reporters that security forces are so focused on the fight against the Taliban insurgency they can’t concentrate on community policing. And media lapped that up & repeated it without an ounce of incredulity.

It’s so moving that Human Rights Watch (HRW) issued a statement denouncing the crime & calling for the prosecution of the cops who took no action to stop the killing & of the two government officials who publicly justified the crime. Maybe at some point they may even denounce US-NATO occupation & bombing of Afghanistan since a 2009 study by the Ministry of Public Health reported at least 66% of Afghanistan’s 32 million people suffer some form of mental illness from 30 years of unremitting war. Not unlike studies of Palestine & Iraq.

Afghan police officials are investigating what prompted the mob assault–whether Farkhunda actually burned a copy of the Quran or if the murder resulted from an altercation with amulet-venders. As if either act justifies beating a woman to death. Media reports “Some Afghan officials & religious leaders sought to justify Farkhunda’s killing, alleging that she had burned a copy of the Qur’an.” Could they identify these officials (other than the two cited by HRW) & religious leaders? Or do unspecified assertions suggesting legions of Afghan men are psychotic misogynists better serve war propaganda? If they can’t get the crime straight, maybe they can’t get anything else right either.

Afghan women’s rights activists carried Farkhunda’s coffin at her burial yesterday in Kabul attended by hundreds of mourners. Men formed a protective chain around the pallbearers & women right’s attendees chanted slogans demanding justice. Imagine that! Who knew Afghanistan had women’s rights activists or that the men weren’t all savages!? In fact, there was widespread condemnation of the killing. The funeral was broadcast live & addressed by politicians & senior police officers because if they’re too busy to stop a mob assault on a woman they not too stupid to recognize a political tsunami of outrage coming at them.

To counter the impact of human rights outrage by Afghans, media (including the Washington Post, LA Times, Al-Jazeera) repeated the mantras justifying the US-NATO war: “Women are treated as second-class citizens in Afghan society;” “Violence against women is endemic in Afghanistan;” Afghanistan is “routinely named by international rights groups as one of the world’s worst places to be a woman;” a 2013 United Nations report noted that most violence against women goes underreported, particularly in rural areas. And of course, the piece de resistance of war propaganda: ‘despite constitutional guarantees of equal rights & advances in education since the 2001 US occupation ended harsh Islamic rule by the Taliban, little has changed for women. “Girls are routinely married off as children, traded as chattels & then rarely permitted to leave their homes without a male relative.”

Taliban rule in Afghanistan was from 1996 to 2001. Five years compared to 15 years of US occupation & bombing. How long will the US & its Afghan puppets be allowed to get away with blaming the Taliban for crimes against women? Only as long as it takes the international antiwar movement to mobilize by the millions to bring this barbarous war to an end.