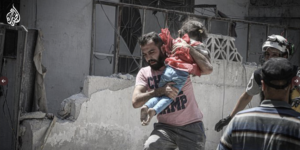 Syrian & Russian warplanes continue targeting residential neighborhoods, public markets, farm fields in Idlib for now 91 days in a row using barrel bombs & incendiary weapons. By one estimate, 800 civilians, including 200 children, have been killed. In response, Assad propagandists Bartlett & Beeley are mocking the suffering of children as staged & continue to hammer away with drivel against White Helmet rescue workers as terrorists engaged in organ trafficking. That’s because the suffering of children & the work of the White Helmets most expose the crimes of the regime. The two propagandists travel the world on expense accounts, after receiving instructions from their Syrian handlers, denouncing the Syrian Arab Spring as terrorists & being feted as independent journalists.

Somewhere along the way the international antiwar movement heard the Islamophobic & anti-Semitic denunciations of the deranged propagandists & collapsed. Their brains fell out & they now talk collectively through their asses. There are those who prefer a pedagogical response to such a monstrous betrayal of the Syrian struggle against dictatorship & try to reason with corruption. Others know it is no longer possible to bring them back from political oblivion & wouldn’t want to work with them if they could. Once they smugly denounced millions of civilians as “al-Qaeda affiliated Salafi-jihadi terrorists” & actively supported Syrian & Russian bombing of civilians to defend the self-determination of the Assad dictatorship & prevent a “US regime-change operation,” there was no hope that such a corpse could be resuscitated. May they rot in hell.

The corruption & collapse of the antiwar movement does not mean the majority of people in the world support the Assad regime & turned their backs on the Syrian people. On the contrary. The problem is that misrepresentation & confusion about the role of the US-coalition in the counterrevolution undermined efforts to build a movement in support of the Syrian Arab Spring. Despite the immense betrayals & failures, the Syrian uprising against the Assad dictatorship fights relentlessly on against considerable odds. In the long run, rest assured, it will bring the regime down.

Stop the bombing of Idlib. Demand the immediate, unconditional withdrawal of all Russian, Iranian, US-coalition (including Israel), & Hezbollah forces & mercenaries from Syria.