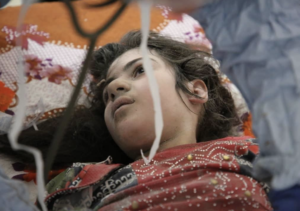 Fascist propagandist Eva Bartlett posted a tribute to Assad which is far more temperate than her usual paeans to him & his anorexic but stylishly emaciated wife. Usually her & Beeley’s tributes to the Assads bring sycophancy to a level of groveling seldom displayed even by the servants at Buckingham Palace who wipe the asses of the British moochocracy. This time, as she anticipates the defeat of the Syrian Arab Spring with glee, she said “2019 is the year of proudly thanking President Assad for his steadfastness when nearly the entire world was against Syria.”

Alas poor Eva, the entire world was never against Syria. It was against the Syrian dictatorship. Assad propagandists talking arrant Islamophobic & anti-Semitic rubbish about “US regime-change operations” convinced the leading but corrupted & lazy-assed figures of the international left & the antiwar movement to side with dictatorship against the Syrian Arab Spring. These political corrupted lent their support to fascism & made sure there was no sustained international support for the Syrian uprising nor opposition to the massive bombing by Syrian, Russian, & US-coalition (including Israel) forces. The Syrian people are paying a massive price for that betrayal. Perhaps, as one final gesture, the corrupted buffoons could explain to us exactly which Syrians, other than the Assad regime & its class, benefited from bombing to defend the Assad dictatorship’s right to self-determination since millions are in refugee camps or living on the streets, millions are dead, hundreds of thousands are injured, & 100 percent are traumatized.

Stop the bombing! Demand the immediate, unconditional withdrawal of all foreign military forces & mercenaries from Syria!

(Photo of child in Idlib from White Helmets: one of those photos deemed too violent to post by Facebook censors)