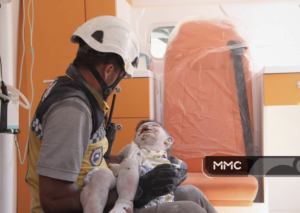 Is this image from a Syrian on Twitter too violent for the White Helmets to post on Facebook? This small child is one of eleven civilians, including six children, who were killed in Syrian & Russian airstrikes on Ariha, Idlib. The youngest child killed was two-years-old. Many of those killed & injured in Ariha were among those displaced in Syrian & Russian bombing in other parts of northwest Syria.

If there is one thing we need to understand, contrary to Assad propagandists & their guppies, it is that Syria & Russia in league with their US-coalition allies (including Israel), are directly targeting civilians, the participants in the Syrian Arab Spring, in order to send a message to the rest of the world that any attempts to stand up against the prevailing political order will be militarily crushed.

Stand with the Syrian Arab Spring. Stop the bombing. Demand the immediate, unconditional withdrawal of all foreign military forces & mercenaries from Syria.