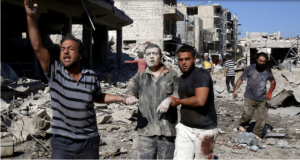 Syrian rescuers are here helping a man they pulled out from the rubble of a building destroyed today by Syrian & Russian bombers on Maarat al-Numan, Idlib. Syria & Russia have been engaged in nearly three months of indiscriminate & intense bombing along with a fierce ground offensive on popular markets & residential neighborhoods, not in attacking nests of terrorist militias. Hundreds of civilians have been killed, critically injured, or massively displaced with no place to go since the border to Turkey is sealed.

The Syrian Observatory for Human Rights which monitors injuries & fatalities reports that 2,443 people have been killed since April 30th: 629 civilians, including 159 children; 869 pro-government fighters & troops as well as 945 insurgents; countless others have been wounded, some critically; many towns have been destroyed. At least 330,000 have been displaced & since the borders are sealed, they now live in squalid overcrowded tents near the border.

In the airstrikes today on Maarat al-Numan, a White Helmet rescuer searching for bodies under the rubble told Reuters, “Bodies are lying in the streets. May God take revenge on Putin & Assad for their crimes.” Tariq Ali, Fisk, Cockburn, Pilger, & the corrupted antiwar movement remain silent on the slaughter.

Stop the bombing of Idlib. Stop the slaughter. All foreign military forces & mercenaries out of Syria.