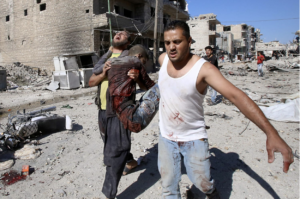 Idlib: in the densely populated town of Maarat al-Numan, at least 25 civilians were killed & many critically injured today by Russian airstrikes. The silence, actually complicity of the corrupted antiwar movement in supporting this slaughter as a fight against ‘Salafi-jihadi terrorism’ damns it to complete irrelevancy. Once they fell into the trap of the Islamophobic ‘war on terror’ & the anti-Semitism that accompanies it, they made a Mephistophelean deal that does not separate them from the military-industrial complex they pretend to denounce.

When the Stalinists & Assadists who have run the antiwar movement into the ground say Syrian & Russian bombing of civilians is not a concern to anyone but Syrians & that only US ‘regime-change operations’ should concern us, they betray every principle of human decency, let alone political solidarity.

Stop the bombing of Idlib. Stop the slaughter.