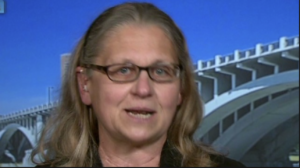 In August 2000, ninety animal rights activists were arrested in Minneapolis, Minnesota for protesting a conference advocating experiments on live animals. At least 800 riot cops were deployed to encircle us & prevent us from protesting. When it was clear that they intended to assault us, I attempted to negotiate with the officer in charge to prevent an attack. When they refused to negotiate, I stood up in the middle of the cordon & gave a speech to the hundreds watching from outside the police line. I explained that our right to protest had been taken away, that we wanted no confrontation with the police & would leave the area as the police deemed appropriate. That made it difficult for the police to attack us with the truncheons they were brandishing. But they arrested 90 of us, nearly half of whom turned out to be undercover agents, & put us on trial. Amy Klobuchar, a Democratic candidate for president, was the county attorney in charge.

When I attempted in 2009 to get part-time work as a substitute teacher in Texas, the Board of Education informed me that the FBI had flagged my criminal record for the use of a weapon of mass destruction (WMD) making me ineligible for work. I have been refused other jobs since then because of that FBI flag although I have no criminal record because the judge at my trial threw out all the charges & chided the county for bringing legal action. When I contacted the FBI, I asked what WMD they accused me of using. They refused to say. I sarcastically chided them for letting an accused terrorist walk the streets for nine years without interrogation, a formal accusation, or prosecution. They refused to remove that flag from my criminal record.

It’s quite expensive to get an FBI flag removed from your criminal record so I approached Colleen Rowley who by then had become a national celebrity as an FBI whistleblower. She refused to help me remove that flag but admitted she was the FBI legal counsel who made the decision to put it on my record in the first place. In 2002, two years after she falsely accused me of using a WMD, she wrote a public letter to then FBI Director Robert Mueller which reveals the conservatism of her whistleblowing politics & protests the Iraq War on the basis of the false accusation of WMD. So what explains Rowley’s metamorphosis in the space of two years from falsely accusing me of using a WMD to protesting the false accusation against Iraq for using a WMD?

Rowley is now a respected leader of the corrupted US antiwar movement. She is an ardent Assad & Putin supporter, supports Syrian & Russian bombing of civilians, & blithers on endlessly to mock Russiagate. Her politics remain conservative, libertarian, detestable.

(Photo of Rowley from CNN)