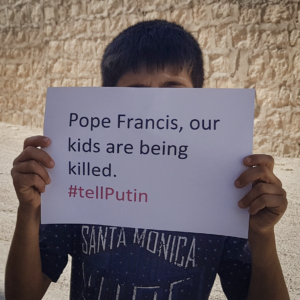 Putin visited Pope Francis at the Vatican yesterday where they reportedly had a “cordial” discussion on the wars in Syria & Ukraine. Syrian activists organized a #tellPutin social media campaign urging Pope Francis to take a stand against Syrian & Russian carpet bombing of Idlib. But when it comes to war, occupation, genocide, Pope Francis is a case study in the politics of ambiguity. He’s a master of proffering empty gestures to the oppressed & solidarity to the power elite.

Since becoming pope in 2013, he has often expressed concern about the conflict in Syria, called for ceasefires, held prayer vigils, & exchanges regular diplomatic messages with Assad. But when it comes to the war in Syria, Pope Francis speaks in passionate abstractions & makes no condemnations. Pope Francis cannot be called equivocal since in 2016 he appointed archbishop Mario Zenari as the papal envoy to Syria & as a new cardinal (the highest office in the church which makes him eligible to be pope). Zenari is a boldfaced supporter of the Assad regime who celebrated the fall of Aleppo to regime forces in 2016 & who posed for photos with Kinana Allouche, a reporter for pro-Assad Syrian TV who posted selfies of herself radiantly smiling in front of the corpses of Assad opponents.

Putin came & left the Vatican. There was no “clash of world views” as the NY Times claimed, particularly on the issue of homosexuality. Whatever distinctions there may appear to be are merely rhetorical. Pope Francis talks a good line on war, occupation, genocide but always manages to render solidarity to repressive regimes.