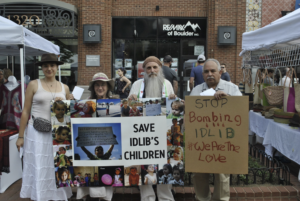 This protest in solidarity with Idlib is in Boulder, Colorado. It is hardly the largest or most impressive protest yesterday out of many. Nor does it reflect the huge number of activists who posted placards on social media reading “Stop bombing Idlib.” But what this protest & all the other protests do show is the immense potential for building a principled & massive antiwar movement to replace the corrupted remnants of the old one who vigorously chased the ass of the Assad dictatorship & support Syrian & Russian bombing of civilians.

Stop the bombing of Idlib! Stop the war on then Syrian Arab Spring uprising!