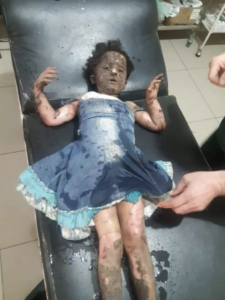 This little girl survived the Russian bombing massacre of al-Bara, a village in Idlib province an hour south of Aleppo. She has survived without being disfigured or dismembered but not without the devastation of war trauma & PTSD to haunt her entire life. The entire region is under siege by Syrian & Russian bombers, troops, & Iranian militias. We hope her medical treatment is completed before Russian & Syrian bombers get to this medical facility.

Over three-million people lived in communities in Idlib & Hama but since the bombing & ground troop assault by Syria, Russia, & Iran began several weeks ago, over 270,000 have fled for their lives, unable to cross the closed Turkish border, & forced to live in squalid refugee camps. For those who so misguidedly want the US to militarily interfere to stop this carnage, US officials say it’s none of their business since they are engaged in conflicts with ISIS somewhere else. Bombing civilians is what the US does in Syria & several other countries so why would civilians in Idlib be of any concern to the Pentagon?

There are many political commentators of some renown who have not yet, after 8 years, expressed their views on the carnage in Syria. Their cowardice, so easy to confuse with complicity, will not be forgotten. Others like Tariq Ali, John Pilger, Robert Fisk, Patrick Cockburn, Vijay Prashad, Noam Chomsky, have become acolytes of the Assad dictatorship & follow the droppings of Assad propagandists like Beeley & Bartlett as though they were the gospel truth. Then there are the social climbers & Pilger wannabes like Max Blumenthal, Ben Norton, Rania Khalek, Jonathan Cook, who are scrambling to salvage their careers from lies & ignominy. They bet on the wrong horse. They expected to advance their so-called journalistic careers by sucking up to Assad but they’ve lost their careers & no one trusts them. Most of these creeps will survive their treachery regarding the Syrian Arab Spring uprising & will continue to rake in honoraria, publish articles (at least in Russian media), publish unread books (published by Verso press), be treated as éminences grises & celebrities by those without an ounce of political discernment. But it’s over for them whether they recognize it or not. Their sorry asses are no loss but the military defeat of the Syrian Arab Spring which they ensured will remain one of the greatest political reversals of our times.

A salute to the Syrian Arab Spring, which till the last fighter goes down defies the Assad dictatorship & Syrian, Russian, Iranian, & US-coalition military aggression.