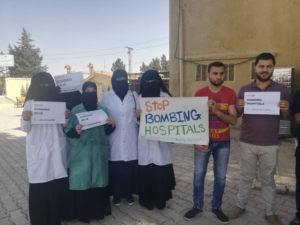 57 medical centers & hospitals have been targeted by Syrian & Russian bombers since February 2019. Do the so-called socialists who support Syrian & Russian bombing of civilians & hospitals have any ready quotes from Lenin, Marx, or Engels that they think will cover these war crimes? Or are Lenin, Marx, & Engels waiting to fry those fat ‘socialist’ asses in hell when they go knocking on the pearly gates? Not even the dead like having their ideas misrepresented to serve war & fascism.