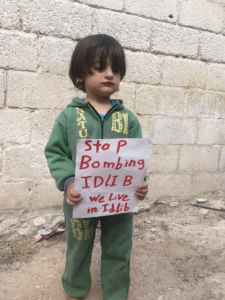 There are many gruesome photos from the bombing of Idlib showing small children dismembered by barrel bombs, the oil barrels with explosives & shrapnel being dropped by Syrian & Russian bombers. They’re too gruesome & disrespectful to post even to counter the rabid propagandists who would claim the children are terrorists or ‘crisis actors’ trained to play dead by the White Helmets.

So we post this appeal from a child in Idlib that wherever we are we make a placard, rally, post protests on social media, or in some way show our support for the civilians of Idlib in the monstrous bombing campaign against them.

Stop the bombing! Stop the war against the Syrian Arab Spring uprising.