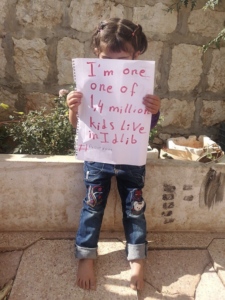 This is a Syrian child, not a terrorist, now sustaining carpet bombing by Syrian & Russian warplanes in Idlib, Hama, & Aleppo provinces. Three million civilians live in the regions where the bombing is taking place, 1.5 million of them children. Today, there are massive protests of internally displaced civilians in the Aleppo countryside demanding the bombing cease & the downfall of the Assad regime.

There have been a few scattered protests of solidarity outside Syria but the now corrupted antiwar movement supports the bombing & is busying itself with that abandoned embassy in DC, the defense of Assange, & just generally pissing into the wind.

Stop the bombing! Stand with the people of Idlib, Hama, & Aleppo.

(Photo from protest today in Aleppo from Amenah Masri on Twitter)