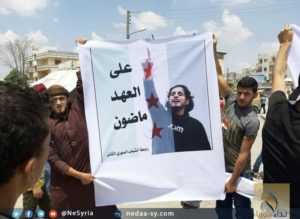 Internally displaced Syrians are protesting in the Aleppo countryside today demanding Syrian & Russian bombing cease, the downfall of the Assad regime, & rejecting another phony ‘truce’ Russia just signed but continues to ignore. In this placard, they honor Abdul Baset al-Sarout who was killed on June 8th in a confrontation with the Syrian army.

It’s been repeatedly reported that Syrian & Russian bombers are targeting those cities in Idlib, Hama, & Aleppo most prominent in the Arab Spring uprising & which have put up the stiffest political resistance to the Assad dictatorship. So it is an act of extreme courage & defiance that these protesters would go public rather than hide in bunkers or flee for their lives.

Stop the bombing! Stand with the people of Idlib, Hama, & Aleppo!