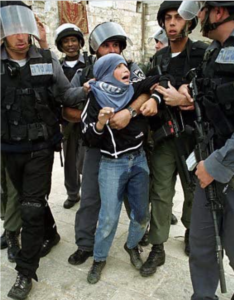 Israeli Deputy Foreign Minister Tzipi Hotovely recently proposed that the UN stop using the term “occupation” to describe Israeli military deployment & control over the West Bank, Gaza, & East Jerusalem. Israeli anti-Zionist historian Ilan Pappé has often made a similar suggestion. But whereas Hotovely, whose parents are Zionist settlers from Georgia in the Caucasus, wants to call the occupation a “liberation,” Pappé prefers the term “colonialism” because Israel has no plans on leaving the occupied territories intact under Palestinian control. Pappé proposed that terminological shift last year before Netanyahu promised to annex what’s left of the West Bank. But it was spelled out in neon in the provisions of the Oslo Accords which in 1994 legitimized the occupation & expropriation of Palestinian lands. That is the harsh reality that makes a bantustate solution a fraudulent pipe dream.

Now if you were to judge this iconic photo–one of thousands showing Israeli soldiers manhandling, assaulting, & threatening small Palestinian children with rifles–would you consider the term “liberation” to be anywhere close to appropriate? Or do you agree that colonialism, apartheid, & genocide are the irrefutable & documented realities?

(Photo is iconic & photographer is unidentified)