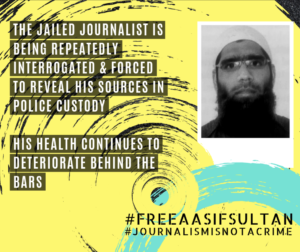 Assange isn’t the only journalist incarcerated & suffering health problems from conditions in the prison. Despite his rotten politics & personal creepiness, his case is politically important as a matter of free press. But it could be said that white supremacy is reflected in the prominence of his case over that of hundreds of other journalists around the world who are jailed, tortured, murdered for committing the same crime of investigating & exposing the crimes of repressive & violent regimes.

This is Kashmiri journalist Aasif Sultan who was arrested last year & is also sustaining health problems in prison. Pardon me for considering his case as important as that of Assange & yet there is no international campaign demanding his release.