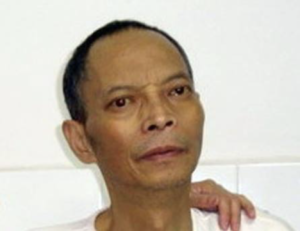 Li Wangyang is honored every year by Hong Kong protesters on the anniversary of the Tiananmen Square massacre. He stands with those Palestinians, Kashmiris, Uyghur, Rohingya, Syrians, Afghans, Yemenis, & so many others who have lost their lives because of an uncompromising commitment to justice, equality, freedom. I repost this in his honor:
******
Today we commemorate the 30th anniversary of Tiananmen Square when the Chinese government violently cracked down on the democracy movement with the imposition of martial law. Student protests for democratic reforms that began in Beijing in April 1989 spread rapidly to include millions of people in over 400 Chinese cities. After the military crackdown on June 4th, the regime used traffic control systems in Tiananmen Square as a surveillance system to track down participants & then unleashed a nation-wide crackdown, hauling in thousands of activists for interrogation & arrest in order to strangle the movement.

This is a day to honor those activists, many of whom were tortured & died in prison. Li Wangyang represents the best in that generation of fighters & reportedly served one of the longest jail terms. He was a 39-year-old factory worker & labor rights activist in Shaoyang (Hunan Province) about 920 miles (1481 km) south of Beijing, who advocated & organized labor unions independent of Chinese government control. Mr. Li was arrested as a result of his participation in the democracy movement, including publicly posting a call for a general strike in support & organizing a memorial for the victims.

He served 21 years in prison on charges of counterrevolutionary propaganda, incitement, & subversion. During that time, he was subjected to hard labor, solitary confinement, torture, & beatings which caused blindness & loss of hearing. In May 2011, he was released for reasons of poor health & checked into a hospital for treatment of diabetes & heart disease. On June 6th, 2012, he was found hanged in his hospital room. Officials immediately declared it a suicide & pressured his family (who visited him daily) for cremation, warning them not to make trouble.

Mr. Li was frail & broken physically by his incarceration but his mind & spirit remained undaunted & fearless. A media interview only days before his death documents that along with the testimony of his sister & family members. He was too weakened by torture & abuse to even stand alone, let alone hang himself. Thousands march every year in Hong Kong to mourn the death of this champion of democracy & human freedom & to demand a formal criminal investigation into his death. The results of such a forensic investigation have not been forthcoming while the regime hopes time will nullify the demand.