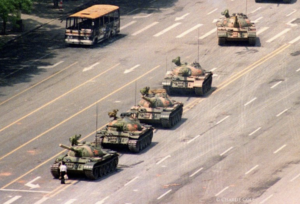 Today, June 4th,  marks the 30th anniversary of the Tiananmen Square massacre in 1989. Tens of thousands protested this year in Victoria Park, Hong Kong, as they do every year, to declare that the struggle for democracy in China continues. This is the iconic moment when an unidentified democracy protestor known only as “Tank Man” & whose fate remains unknown confronted regime tanks.

We should take a moment to honor Tank Man & all those who were massacred, arrested, tortured at Tiananmen in the ongoing struggle for Chinese democracy, of which the Uyghur Muslim people are a central part.