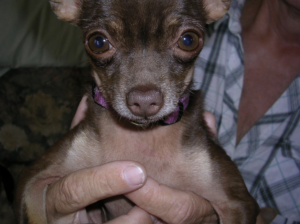 My sweet little Miss Penny died last Friday. She was 7-years-old & less than 3-pounds. A former landlady gave her to me in 2012 because she worked & traveled & would leave Miss Penny alone closed in a dark laundry room. When she traveled, I would take Miss Penny with my little Dombolino, another Chihuahua who was later killed chasing a car. Penny & Dombolino loved each other & were inseparable. When Miss Penny went home to the landlady after a stay, she was bereft & wouldn’t eat so the landlady gave her to me.

She was a fearless, willful little girl whose personality filled the house & terrorized bigger dogs afraid to mess with her. She never did learn not to poop & pee wherever she wanted & I gave up trying to teach her. It’s not that she didn’t know but that she would have it her way, no discussion. She’s been to the vet several times for bleeding from her little butt. This time, the bleeding wouldn’t stop, no matter what I gave her. She was her usual happy little self at the dog park at 2 pm but only five hours later passed away in my arms as I was trying to find an emergency vet still open in the evening.

She came to me a diva & passed away a diva. There are some who say ‘pets are like family’ but that’s not so. They are family & part of our hearts forever. She followed me wherever I went & resented any who dared claim my attention from her. Her annoying little bark & sweet sweet self will be missed forever. <3