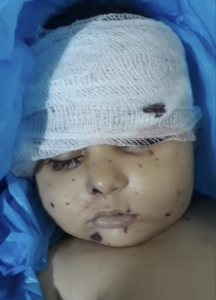 It has been observed that Syrian & Russian bombers are more aggressively targeting those towns that stood boldly against the Assad dictatorship & against the extremist paramilitary groups operating in the region. Kafranbel is one of those towns prominent in the Syrian Arab Spring uprising which held weekly protests against the Assad regime & against the paramilitary groups. Because of their commitment to the ideals of the Arab Spring, Kafranbel’s residents became known as “the conscience of the revolution.” Baby Ahmad is one of those civilians killed because of their commitment to human freedom from tyranny & dictatorship.

May baby Ahmad Rest In Peace.