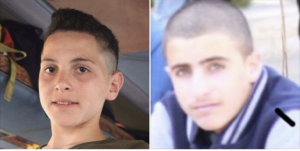 This morning near Bethlehem in the occupied West Bank, Israeli soldiers killed a 16-year-old boy named Abdullah Louai Gheith from Hebron by shooting him in the heart & lungs as he & another young man tried to get to the Al Aqsa Mosque in occupied East Jerusalem for Friday prayers. The other Palestinian, 21-year-old Mu’men Abu Tbaish, was rushed to hospital for a critical gun shot wound to his abdomen & is in surgery. It’s not clear from reports if they were shot attempting to scale the apartheid wall as many youth do to get to prayers at Al Aqsa since Israel will not allow entry at checkpoints to men under 40 without special permits.

Israeli authorities also report that they shot & killed 18-year-old Palestinian Yousef Wajeeh after he stabbed & injured two Israelis & attacked a police officer in East Jerusalem. Yousef had just come from near Ramallah to attend prayers at Al Aqsa on the last Friday of Ramadan so just how likely is it that he stopped on his way to prayers during a high holy day to attack Israelis? Israel used this incident, which certainly didn’t happen as they reported it, to explain why soldiers stopped several buses with hundreds of Palestinians coming to prayers, ordered the passengers off the buses, searched them, & then forced them to walk a long distance to Al Aqsa.

Israel’s claim that they increased deployment of soldiers & police to East Jerusalem in the area of Al Aqsa for security reasons is rubbish. Palestinians were coming to worship during the holy season of Ramadan. The presence of troops was a provocation & a denial of their right to worship. It is reported by some sources that Israeli soldiers opened fire today on other Palestinian men & boys trying to enter the city for prayers but there are no reports yet of others being killed.

The photo on the left is Abdullah Louai Gheith & on the right is Yousef Wajeeh. May they Rest In Peace.