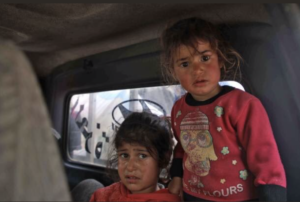 It’s deplorable that there is so little media coverage of the Syrian & Russian bombing siege of Idlib & Hama. But it’s of greater concern that so few Assad opponents are posting about the murderous siege that has forcibly displaced a quarter of a million people. That leaves Assad propagandists to go hog wild portraying civilians being bombed as ‘jihadi terrorists’.

It’s only a matter of time before the last battle & the final defeat of the Syrian Arab Spring uprising which began with such promise in February 2011. There is no coming back from the betrayal of so many erstwhile socialists & progressives, from the complete corruption of the international antiwar movement which supported Syrian bombing of civilians & Russian & Iranian intervention. They will gloat triumphal at the victory of the Assad regime, at winning self-determination for a dictator, & will continue to polemicize as if they were champions of democracy rather than hollow, gaseous windbags. But it is also only a matter of time before their political betrayal catches up with them & they are forced to limp off the stage of history into permanent disgrace where they belong. You cannot betray the just struggles of millions for democracy & think you will get away with it.

All along, the only just demands were the cessation of bombing by Syria, Russia, & the US-coalition & the immediate, unconditional withdrawal of all foreign military forces from Syria. The international antiwar movement completely bombed out on their responsibilities.