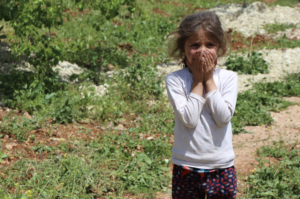 According to civilians in Idlib, Syrian & Russian bombers are only targeting civilian areas, especially homes & hospitals. Does Assad claim civilians are hiding terrorists in their closets & doctors are hiding them in their operating rooms?

Hospitals are inoperable, schools are closed down, & tens of thousands are fleeing for their lives. The numbers of civilians killed is not yet known but several children are among them.